Not normally a pest, however in certain public areas they can become a nuisance or hazard so if you have concerns about a bee nests position in Yorkshire give us a call on 0800 068 4577 for a free consultation and quote!

Honey bees, both feral (wild) and colonised, are important beneficial insects, not normally considered as pests. They live either in the wild in nests, or as colonies in hives kept by beekeepers. In either case, they will only normally sting people if they are provoked.

Need to get rid of Bees in Leeds? Bee Removal Leeds.

During early to mid-summer honey bees will occasionally swarm. This is due to a new queen being hatched in the nest or hive. As there is only room for one queen in a colony, the old queen will leave and take a proportion of workers with her and look for somewhere to set up a new home. This can either be in a hollow tree, chimney, cavity wall, roof or any accessible void. 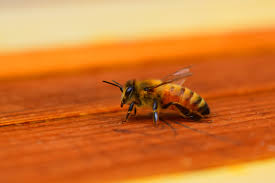 Sometimes a swarm can be seen hanging off of a tree or shrub or other structures. This is normally because they are resting and will eventually move off to a more permanent site.

On no account should you approach them. They will not bother you unless you interfere with them. Instead, leave them alone and call Surekill Pest Control, who will arrange for a beekeeper to collect the swarm, or, if they are inaccessible and could be a danger to the public, will decide if they need to be destroyed and will carry out a treatment if possible.

Need to get rid of Bees in Bradford? Bee Removal Bradford.

Honey bees are characterized by the presence of a long, pointed tongue, social habit, front wings with three closed submarginal cells, and no spurs at the tips of the hind Tibiae (4th segment of the insect’s leg). Adults consist of three castes: queens (3/5- to 3/4-inch long) are fully developed egg layers with only one in each colony; drones (3/4- to 5/8-inch long) are functional males; and workers (2/5- to 3/5-inch long) are undeveloped females.

The first honey bees introduced from Europe were black German bees. The common Ohio variety of honey bee is the Italian, which is a golden-brown and black bee covered with short, dense hair. The forepart of the abdomen is yellow and there is some yellow between the four brown bands on the rest of the abdomen. The Caucasian variety, a mild-tempered bee, is dark, and its abdomen is banded with gray. The carniolan is a gray bee similar in appearance to Caucasian. Most people see only the workers, which regularly fly in and out of the nest.

The queen is the only female in the colony capable of laying fertilized eggs. She is extremely important, because without her no young bees would be replacing the old bees as they die. The rest of the bees pay a lot of attention to her. There is only one queen to each bee colony, and she may live two to five years. She must be fed by the others in the colony, and she can do none of the rest of the chores that need to be accomplished to make honey and keep a clean nest.

Drones are male bees within the colony. There may be several hundred drones in the spring and summer, but they are all eliminated in the fall and winter when their services are no longer wanted. The drone develops from unfertilized eggs and exists only to fertilize or mate with young queens. He typically lives 40 to 50 days, and is bigger than either the queen or workers.

The majority of bees in colony are worker bees. They perform most of the functions bees are known for, such as making honey and stinging for defense. Although workers are females, they cannot lay fertilized eggs. There may be as many as 60,000 workers in a colony, though the average figure for the whole year is 30,000.

Workers live only 40 days in the summer, but may live several months during winter. Some gather nectar and pollen in the field; others process the honey. Usually, the workers perform their duties based on age. The younger ones are cleaners and helpers. The older, more experienced bees, are builders and do the foraging in the field.

The nest is the comb on which the bees rest, rear brood, and store honey. The comb is constructed of wax. It has a central rib, with six-sided cells constructed on each side parallel to the ground. The cells are the storage area for the bee colony and at the same time serve as the nursery for rearing young bees.