Just How Painful Could It Be? The Schmidt Sting Pain Index.

There is an old saying – ‘some people ask for it – other people get down on their knees and beg’. It usually encompasses those who tend to seek out painful or humbling emotional experiences – but Justin Schmidt went skipped over emotional pain and embarrassment and went straight for the central nervous system when he developed the Shmidt (Sting) Pain Index.

We are talking about a man who has taken a devotion to the scientific method to a new (and some would say slightly insane) level. Justin Shmidt has spent much of his professional life as an entomologist at the University of Arizona encouraging insects to sting him. He used this information to develop the ‘Shmidt Pain Index’. The utility of the pain index might be questionable – after all, anyone who knowingly picks up a Tarantula Hawk Wasp could be said to deserve everything they get. Shmidt does, however, have an excuse. He was studying the chemical weapons that insects possess that make them capable of inflicting varying amounts of pain – the Pain Index allowed him to characterize the levels of discomfort that he experienced and better organize his research.

The index is organised into 4 levels – and Schmidt has been stung by over 1,000 insects giving him ample data to work with. Although the intent of the research is serious the Pain Index has been characterized as reading like a particularly interesting wine tasting guide. It is vastly amusing and Shmidt’s dry sense of humour is readily apparent in each entry.

At level 1 he describes the sting of the sweat bee as ‘like a (tiny) spark on one’s skin.’ The ‘Little Wasp’ he describes as possessing a sting that delivers a feeling akin to a ‘slender cactus spine (that) brushed a buffalo wing before it (was) poked your arm’. Things go rapidly downhill from this Pain Index entry point. Here at Surekill we provide pest control service. 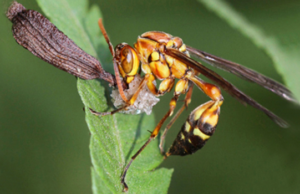 Level 2 ups the ante a bit with entries such as the one for the sting of the Western Honey Bee. The humble Honey Bee is described as providing a sensation that is like ‘A flaming match (that) lands on your arm and is (extinguished by) lye and sulfuric acid.’ It becomes increasingly clear as one reads the entries that this is a man with not only what many would characterize as only a fleeting acquaintance with sanity – but also possessing a laser-like focus on his life’s work.

At level 3 most people would simply have thrown up their hands and given up the exercise as a very, very bad idea. The ‘Florida Harvester Ant’ delivers a sting that is ‘bold and unrelenting (like) somebody is using a drill to excavate your (ingrown) toenail.’

By level 4 Schmidt seems to really start to enjoy his work. The sting of the Tarantula Hawk Wasp is described as ‘blinding, fierce (and) electric. A hair dryer has just been (introduced) into your bubble bath.

However, perhaps he saves the best for last when he begins to realize that the entire exercise may not have been well thought out when he notes about the sting of the Warrior Wasp.

‘Torture. (Like being) chained (to) the flow of an active volcano.’

And finally ‘Why did I (even) start this list?’