Do you might have a gull problem and need help to get rid of nuisance seagulls? Then look no further! Surekill Pest control in Yorkshire are professional gull and nuisance bird control and elimination experts with over 20 years experience in helping property owners and commercial businesses getting rid of their seagulls and nuisance bird problem using proven methods. Call us today on 0800 068 4577 for a free consultation and quote! 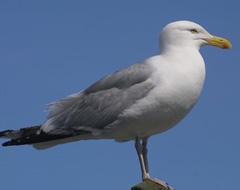 In inland localities, especially outside the breeding season, gulls often roost in many thousands on large bodies of water such as reservoirs or flooded gravel pits. When inland, are largely dependent on domestic refuse for food. Herring gulls and lesser black-backed gulls are becoming increasingly important pests as they have changed their behaviour over the last 20 years, to nest more and more on buildings.

Heavy fouling may occur on buildings used by gulls. They can also damage roofs by pecking, their nests can block drainage channels and chimneys and their aggressive behaviour during the breeding season can result in attacks on nearby humans. They will take birds and small mammals for food.

These birds have a distinct breeding season, between May and August in Northern Europe. The Herring Gull starts breeding when 5 years old and will live for up to 25 years. Normally two eggs are laid per season, but if the eggs are removed or are killed, they can relay several times that season.

Nests are usually made alongside other gulls in colonies and once a breeding site is established, the gulls will return to it year after year. The numbers of breeding pairs on roofs in the UK is increasing at a rate of 10% per year for Herring Gulls and 17% per year for Lesser Black-Backed Gulls.

If you have a problem with seagulls or nuisance birds, call us today on 0800 068 4577 for a free consultation and quote!