Contact us now for same day wasp nest removal for your Leeds home or business. No matter where the wasps are hiding, Surekill’s pest control operatives can wipe them out. Wasps nests located in your loft, roof, wall or garden areas can be controlled by using insecticide spray  treatment. We also provide wasp nest removals in Bradford, North, South and West Yorkshire.

We all know that wasps can be a nuisance in your home or business and no one really thinks that tackling them yourself is a good idea - do we?

So if you think you might need help to get rid of your wasp nests in Leeds, give us a call! As professional, Yorkshire based pest control and insect elimination experts we have over 20 years experience in helping home owners and commercial businesses get rid of wasps. So if you are being terrorised everytime you step outside, or worse still, you are being invaded inside, we can help, using proven methods. For wasp removal in Leeds, call us on 0113 457 4550 for a free consultation and quote! You will wonder why you have put up with then for so long. For non wasp related issues, see our general pest control page

Wasps are very well-known – large, conspicuous buzzing insects with yellow and black striped, wasp-waisted bodies, 10-15mm long. They have a sweet tooth at one end and a painful sting at the other.
The queen wasp is larger (20mm) and she hibernates over winter, making a nest in the spring in which to lay her eggs. She feeds the grubs on insects until they develop into worker wasps, three to four weeks later. 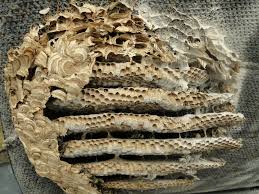 Workers, all sterile females, forage for over a mile in search of food. One nest may produce 30,000 wasps in a year. At their peak in August and September with the youngsters reared, the workers turn to the sweet food they prefer and become a nuisance wherever this is available.

You have to ask yourself, if you dont deal with this problem now, do you really want the queen hibernating ready to start the whole thing again next year?

Wasp nests may be suspended from trees, nest boxes, bee hives, rafters and dormer windows, or they might just be inside your roof space, hidden from view but just as much a nuisance.
If annoyed or threatened, wasps will sting and the best remedy – after removing the sting with a clean finger nail – is to apply an anti-histamine. Some people react violently to being stung with several dying each year.

If you have a problem with wasps or wasps nests in Leeds, call us today on 0800 068 4577 for a free consultation and quote! Surekill- Wasp Nest Removal Services in Leeds